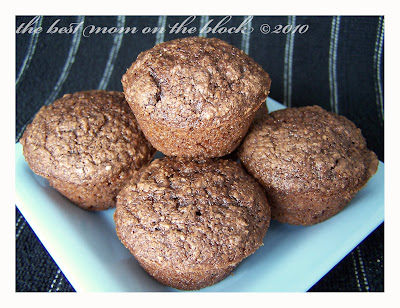 I had babies. I got big with both of them. REALLY big. 'People would stop me and ask me if I was carrying twins' big. After I had them I turned to an internationally recognizable weight loss company to help me with my weight watchin' (wink wink).

I learned a lot about my body and what works and what doesn't. What didn't work: trying to cut chocolate out of my life. BIG mistake. I lasted about a day. One long, cranky, bitter, long day. After that I knew I needed to give myself what I craved, but to do it in a way that didn't involve eating a king size chocolate bar. Floating out there on the weight-loss message boards was a recipe for bran muffins, chocolate bran muffins. I've never been a fan of bran muffins but they sold me on the chocolate and low-cal part.

I have no idea who invented these tasty little fudgey muffins but thank you whoever you are! Not only are they great for those who are looking for a low-cal/low-fat snack, they're great for anyone! Loads of fibre and yummy chocolate, a great quick breakfast or a snack on the go. If your kids are a little turned off by the bran texture throw in a handful of chocolate chips and you won't hear any complaints! Also, these are great to make with your kids. When you add the baking powder to the moist cereal it's almost like a science experiment, the mixture begins to bubble and expand and... well, I don't want to ruin the fun, you'll see.

Give these super simple and very nutritious muffins a try, I guarantee you'll never buy a bran muffin from a coffee shop again!

1. Place cereal in a large bowl and add the water.
2. Allow the mixture to sit until the water has been absorbed by the cereal. Mix lightly to make sure all the cereal is moist.
3. Add the baking powder and stir to combine. Allow to rest for a minute or two.
4. Add the brownie mix and stir only until combined.
5. Bake at 350˚F for 20 minutes or until set.

Tip: to turn these yummy little treats into a dessert, top with a bit of icing!

Print this recipe
Posted by Amanda at 8:35 AM 5 comments: 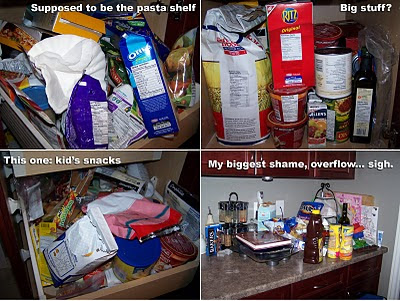 I was talking to Christy of Beach Brights fame and she mentioned that her pantry had become a hoarders delight. It was messy and disorganized. I chuckled with her about how it would be fun to do a post on tidying up her pantry, and that's when it hit me, my own pantry was... well.. let's just say it looks like Gremlins attacked it at 12:01am. Nothing was on it's "right" shelf, I knew I had duplicates of some stuff but couldn't find them, and it was so crammed I had overflow onto my very precious counter space.

I know, shocking right? How do I cook like this? I can tell you it took longer than it should to make a lot of my recipes cause I was hunting for stuff.

Now, I live in a house with 2 kids under 4, an 18 year old boy and a husband, all of whom have never understood the term "put it back where you found it" so essentially I had given up. It was an open the door, throw it in, and close the door super fast kind of situation.

Inspired by Christy, I set out one night, while watching Grey's Anatomy to organize my pantry. I'm a happy cook now... and if I see anyone putting something back where it doesn't belong... no dessert for them for a week! 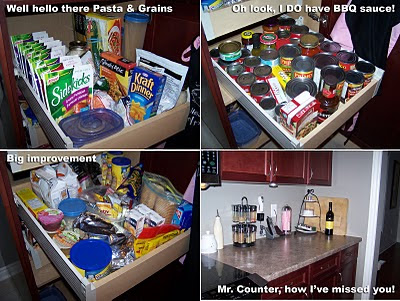 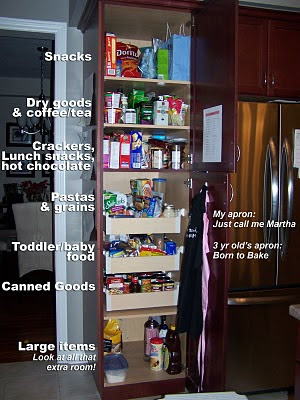 Head on over to

to see how Christy did with her pantry!
Posted by Amanda at 7:39 AM 5 comments: 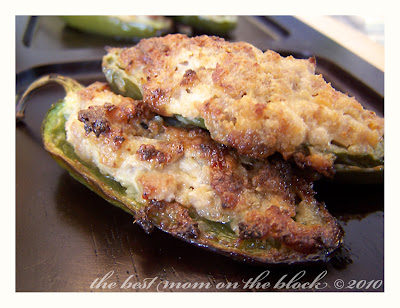 If you read my previous post (does anyone actually read them or does everyone skip down to the recipe?) you'd know I'm whipping up snackies for my husband's annual Superbowl par-tay. Every year he can expect the same staples: Chili, meatballs, nachos, and something with bacon. I wanted to make something no one had ever had before! Some new! Something exciting! Something with so many calories it just HAD to be the greatest superbowl snack ever!

Enter the Sausage & Cheese Stuffed Jalapeno. I was cruising allrecipes.com looking for inspiration and came across this recipe and it jumped off the screen at me. I had intended on making it as per the posted recipe but upon tasting the sausage mixture I made some adjustments and the result was deliciousness in my mouth (as you can see from the picture below)! 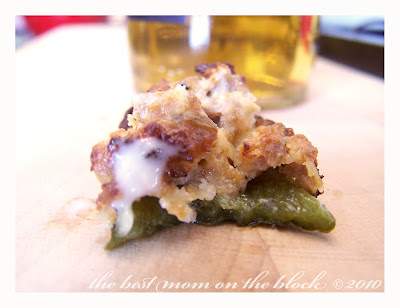 A little tip on working with jalapenos: WEAR GLOVES! I live in a cold dry climate in the winter and my hands get cracked from all the hand washing and dishes I do, jalapeno juice and cracks/cuts do not mix! WEAR GLOVES when seeding and deveining the jalapenos and wash your hands thoroughly after too just in case. That jalapeno oil is lethal stuff!

1. Crumble sausage in a skillet and cook over medium heat until evenly brown. Drain grease.
2. In a bowl, mix the sausage, cream cheese, ranch dressing, seasoning and Parmesan cheese.
3. Spoon about 1 tablespoon sausage mixture into each jalapeno half. Arrange stuffed halves on a cookie sheet.
4. Bake 20 minutes in a 425˚F oven, until bubbly and lightly browned. Serve with Ranch dressing. 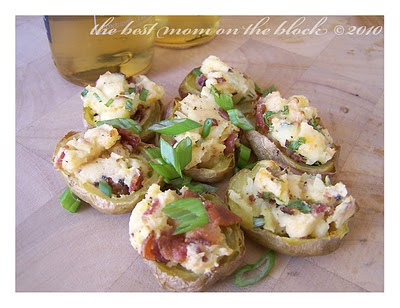 It's Superbowl Weekend! Yippee. Can you feel my enthusiasm? I am a girlie girl, football does not appeal to me in the least. (I know, men with nice rears in tight pants, I get it, still not watching.) My husband goes to a party every year at a friend's house (Thank Jeebus!) so I'm spared the day long analyzing about a game that hasn't even happened yet on the sports channels, the belching and the cloud of testosterone that fills the air on days such as these. But like a dutiful wife, and also cause I feel for the poor woman who does have to put up with the aforementioned items, I send along some snacks to keep the men-folk from rioting when their team is tanking.

This year my husband picked potato skins. I made them a couple of years ago and the guys loved them. The only complaint was that they were very filling (I made them using gigantic potatoes cause as we all know in man-world, bigger is better, right?) and with all the food that everyone brings, half of them were left behind cause they wanted a little bit of everything.

This year I got smart. I made tasty little one bite skins that they can pop into their mouths between spoonfuls of chili and mouthfuls of nachos. These work great for your little football fans too. Cheesy, bacony (is that a word?), and crispy, these will be a hit at your Superbowl party, or with a chick flick, which is what I'll be watching at kickoff time! 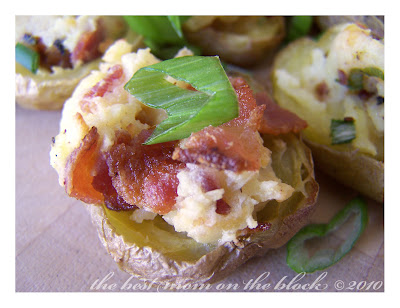 1. Prick the potatoes and arrange in a single layer of paper towel in the microwave and cook on high for approximately 3 minutes or until fork tender.
2. Cut potatoes in half length wise and scoop out inside leaving a bit to give the skins some stability.
3. Place hollowed out skins on a baking sheet and drizzle with oil. Place in a 350˚F oven for 10 minutes.
4. In a bowl, mix the potato, cream cheese, cream and salt & pepper until combined and smooth.
5. Stir in the cheese, bacon and onion and combine.
6. Remove the skins form the oven and fill each one with the potato mixture.
7. Return to the oven for 10 minutes or until potatoe mixture is heated through and cheese has melted.

Serve with sour cream, salsa or ranch dressing to dip in. 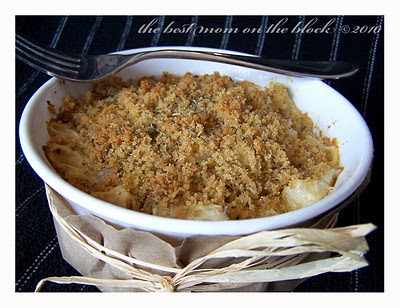 Sometimes you just need a big ol' bowl of comfort food. That time was this week for us. My kids were sick and my husband and I were on call 24/7 for days and days. We were tired, drained and needed some TLC for ourselves. I pulled out my trusty recipe cards (I know, so retro) and stopped flipping when I came to this recipe. 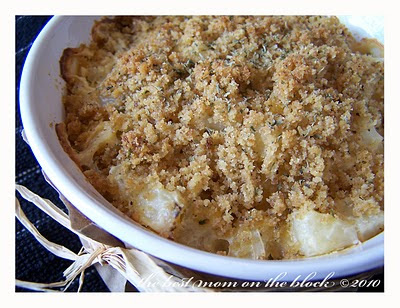 Originally called "Hashbrown Casserole"(a very popular recipe as I discovered upon googling it), I changed the name to Bake cause I've been told the mention of the word "casserole" can incite riots at the dinner table. This (shhh!) casserole is creamy and cheesy and fills you up with warm, gooey, yumminess. I usually serve it alongside Honey Baked Ham (a tradition in my Husband's family), but it would be great with steak or chicken, or as an addition to your brunch table as my sister is fond of doing. 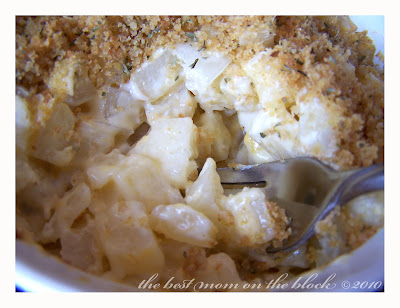 It's quick and easy to assemble, and is always met with smiles at dinnertime. Give it a try and see what your family thinks!

1. Combine the soup, sour cream, onion, salt and pepper.
2. Mix in the hashbrowns and cheese and mix to thoroughly combine.
3. Pour mixture into a greased oven safe dish.
4. Mix the melted butter with the bread crumbs and crumble over top of the hashbrown mixture.
5. Cover and bake at 350˚F for 1 hour. Uncover and cook an additional 10 minutes to allow top to brown. 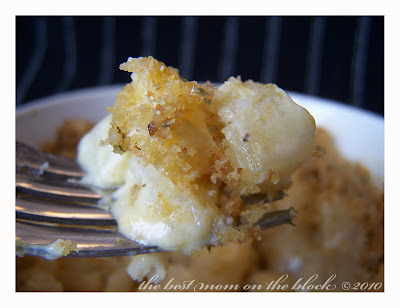