Hello to all my loyal and new followers/readers/creepers!
My 2nd Blogoversary is a mere 26 days away! This past year has been so fun and lots of exciting and wonderful things have happened to the blog (and myself) like the redesign and my becoming the food writer at amotherworld.com. More exciting things to come in the very near future, but for now I want to thank you all for using and reading my blog with a GIVEAWAY!

My oven got all attitude-y with me this week and decided to continue to get hotter and hotter after it reached the temperature I put in, so baking and roasting is out of the question until the repair guy comes and fixes it (hopefully soon, I'm dying over here!). It's made me really appreciate my barbeque and my slow cooker! 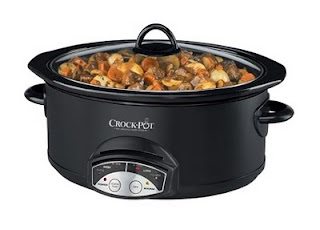 So in honour of my small kitchen appliance saving the day, I'm giving away a CrockPot® Slow Cooker and a General Mills prize pack!

To see a complete list of the Crockpot's features and  the General Mills Prize Pack contents, click here.

I use my slow cooker for chili, pasta sauces, pulled pork and soups, and I'm experimenting with new recipes all the time!
There will be some other goodies, tools I use in my own kitchen that I love like some silicone spatulas and Baker's Secret bakeware. When I get it all together I'll list all the items!

So now you're wondering "How do I win this fabulous prize?"

Head over to lifemadedelicious.ca's collection and tell me which recipe you would make first in your new CrockPot®! While you're there I highly recommend you sign up for their newsletter, every 2 weeks you'll get an email full of yummy recipes!

Want extra entries?
Each item you do will get you ONE other chance to win (for a total of 6 chances), if you ALREADY do any of these things, they DO count! So make sure to comment for each item! You must leave each entry as a separate comment or only one comment will count.

• This giveaway is open to Canadian and continental USA residents only.
• Winner will be generated via random.org. The winner will be announced on The Best Mom on the Block blog on April 13th, 2011 at 3pm EST.
• The winner will have until 4/18/11 to claim their prize, or I will choose another winner.

Disclosure: The General Mills Prize Pack was donated for this giveaway by General Mills and MomCentral. I was not monetarily compensated for a positive review or for including their products in this giveaway. I purchased the other products myself based on my own experience with them. I am not responsible for any allergies, defects or repairs that might arise now or in the future with any of the products. 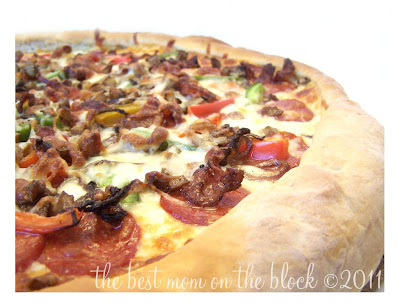 My four year old, Lily, has been watching me cook and bake since she was a baby and her interest in helping has finally been ignited. She wants to help stir and pour and, of course, taste test.

Kids are way more capable than we give them credit for, and the more we involve them in the kitchen the more they’re willing to try new foods. Lily loves helping out on Pizza Night. In fact, the whole family has a hand in Pizza night. I make the dough and prepare all the ingredients, my husband rolls out the dough and “makes” the pizza and Lily gets to help him by placing the pepperoni on (more go in her mouth than on the pizza but whatev) and then she helps sprinkle on the cheese. She’s always so proud of it when it’s done and we make sure to tell her how yummy it is!

Pizza night is an easy and fun way to get your whole family into the kitchen and cooking. If you don’t have time to make your own dough, most grocery stores sell frozen balls of dough in their freezer sections or you can use Naan or Greek pitas and everyone can make their own! 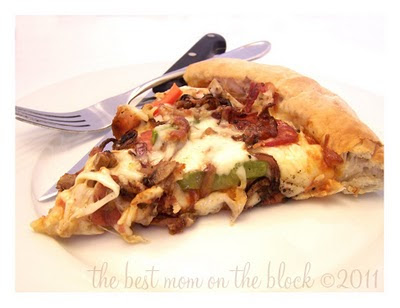 1. Add ingredients in the order they appear and mix on the dough setting of your breadmaker. If you don’t have a breadmaker, you can use a stand or hand mixer with dough hooks or a food processor with a dough blade (you will need to allow the dough to rise in a warm place until doubled, punch it down and allow it to rise a second time).
2. Check the dough after about 5 minutes to see if it’s too wet or too dry. Add either flour or a bit of water to help with consistency. If you touch the dough and you get it stuck on your finger you need to add a bit of flour (1 tbsp at a time), if it isn’t forming into ball nicely, add a teeny bit of water.
3. Turn out dough onto a lightly floured work surface and allow to rest under a tea towel for 5 minutes.
4. Roll dough out to size on a pizza stone or pizza sheet.
5. Bake for 8 minutes in a preheated 400˚F oven.
6. Remove and top with sauce and your favourite toppings.
7. Return to the oven and cook for an additional 16 minutes.
8. Remove from the oven and allow to sit for 5 minutes before cutting and serving.

For a great homemade pizza sauce recipe packed with veggies your kids will never know are there, go here!
Posted by Amanda at 7:29 PM 1 comment: 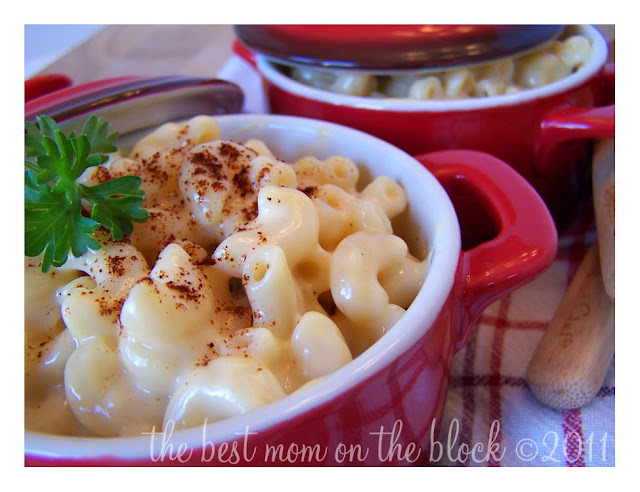 I am so depressed. It was looking like spring was just around the corner, then I woke up to a fresh foot of heavy, wet snow that shut down the highways and closed the schools the last day before March Break (are you kidding me?!). And then to top it off, my oven has broken. Something is wrong with the thermostat, it just keeps getting hotter and hotter and burns everything (wah!). The only cure for this: comfort food. Bring on the Mac & Cheese!

I am waaaay too impatient for the "in the oven with bread crumbs on top" kind (perfect considering my oven has gone on strike). When I want Mac & Cheese I want it fast, so I make a stove top version that's creamy, cheesy and makes my husband look at me with that "look", you know the one. The one that says "Go buy any pair of shoes you want... with my credit card.". (where did you think I was going with that? This is a FAMILY site! Geez!)

I start with a basic béchamel sauce (don't be scared) and melt a few different cheeses into it to make a rich, velvety soft cheese sauce. My kids prefer macaroni for this but any short pasta like penne, rotini or "scoobi-doo" noodles will do. 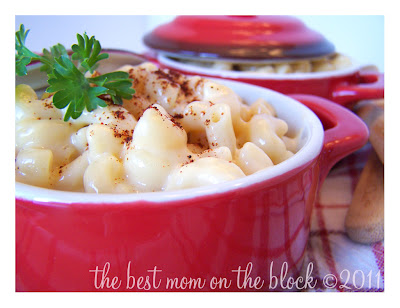 1. Cook pasta to package directions.
2. In a large pot or saucepan, melt butter over medium heat.
3. Add flour and stir to combine. Cook flour/butter mixture, stirring frequently with a whisk, for 3-5 minutes or until flour has developed a light golden colour.
4. Reduce heat to low and slowly add milk, whisking constantly until everything is incorporated and the sauce is smooth.
5. When the béchamel has thickened to the consistency of cake batter, add the Cheez Whiz and Velveeta. Stir with a spoon until cheese has melted.
6. Add the shredded cheddar and stir until melted.
7. Season with paprika, salt and pepper to taste.
8. Add cooked pasta to the cheese sauce and heat through. Serve with a side salad or fresh, crusty bread.

Links to this post
Email ThisBlogThis!Share to TwitterShare to FacebookShare to Pinterest
Labels: cheese, comfort food, cooking for kids, pasta 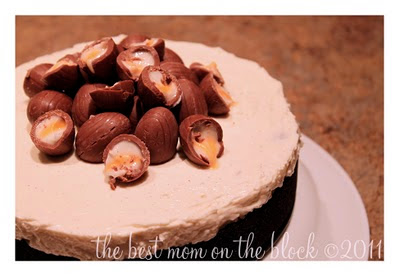 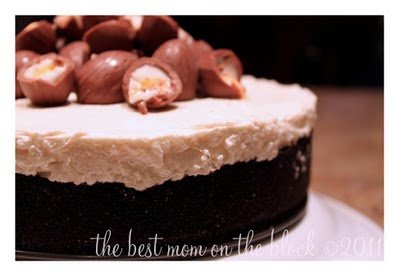 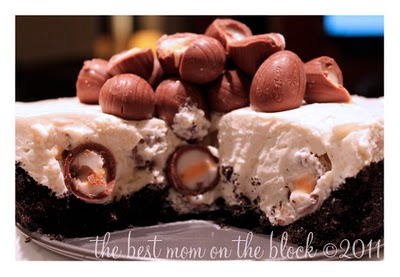 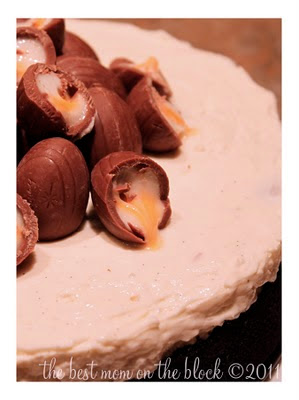 Hello all my faithful followers and anyone new stopping by! I have a few pieces of exciting news. One, I created a Facebook page!Head on over and "like" it, lots of pictures and discussions to check out! Don't make me beg. 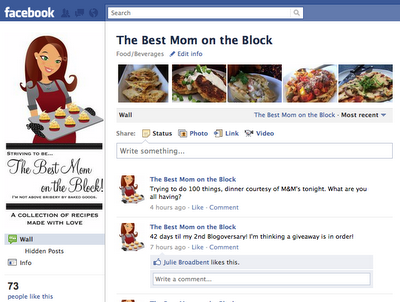 The second piece of exciting news is that I was nominated for Babble's Top 100 Mom Food Blogs! Yay me! I'm in amazing company but if you would be so kind to cast your vote my way I'd be forever grateful.... which I will reward with more delicious {chocolate} recipes! I'm listed as Caffeinated Mom, which if you follow me on twitter you'll recognize as my twitter handle. So go here, click "I Like This" next to Caffeinated Mom and you'll make my kids so happy! *cough*guilt*ahem*

And lastly, I happened to scroll to the bottom of my page and I noticed that my Blogoversary is in 41 days! I'm putting together a fun giveaway so stay tuned!

It's true what they say, good news comes in threes!
Posted by Amanda at 6:57 PM 2 comments: