Life Made Delicious Posts ~ A Recap

Hello loyal blog readers! I've been blogging over at lifemadedelicious.ca for a month now and I thought I'd recap what's been going on over there in you missed it and wanted to check it out :) 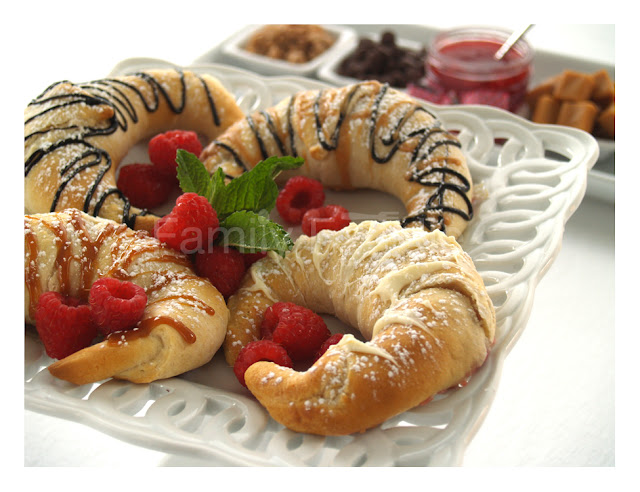 First up, homemade Pain au Chocolat using Pillsbury Cresent rolls and whatever filling your little heart desires! If your dad/husband has a sweet tooth this would be a great addition to your Father's Day brunch table. 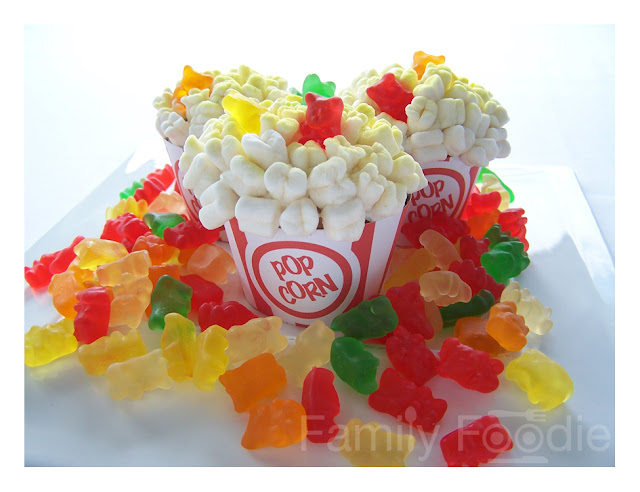 Next up: clever treats for Family Movie Night! These are cute little Betty Crocker cupcakes with marshmallows to look like mini popcorn buckets! Are you dying from the cuteness? They're very easy, don't be intimidated. I even include a free PDF file of the wrappers you can download and printout to impress your kids!

My newest post is an ode to my love of summer and a creative barbeque recipe idea... it doesn't always have to be about burgers and hot dogs... 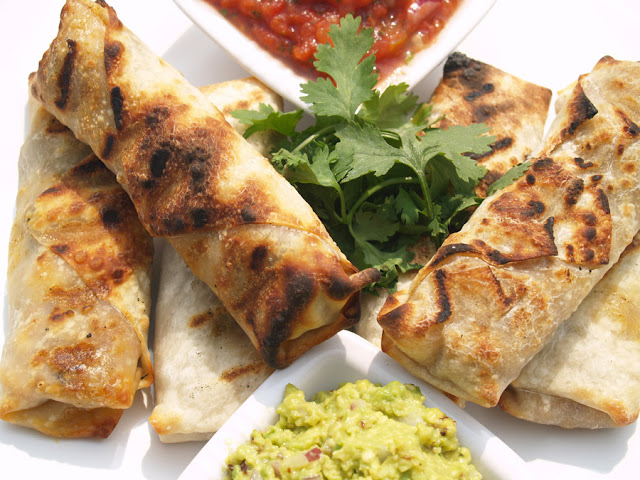 To find out what this is, check out my lifemadedelicious.ca blog!

please see my disclosure page for information on my Life Made Delicious Partnership.
Posted by Amanda at 8:38 AM 3 comments:

BLT Pasta Salad and a Giveaway! 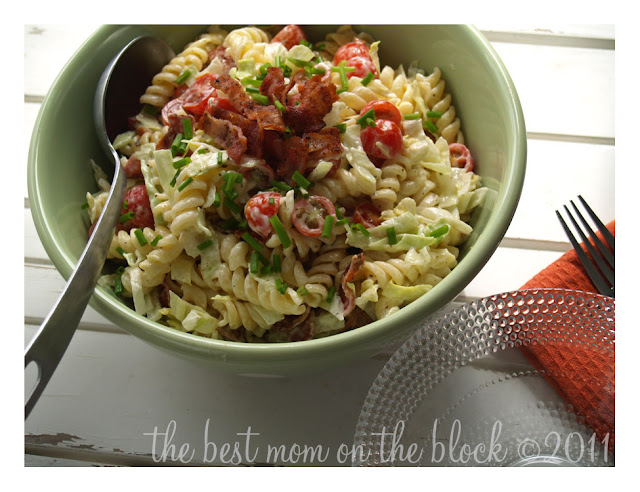 Our barbequing has been kicked into overdrive the past two weeks. Temperatures are soaring and no way am I standing in a hot kitchen over a boiling pot of anything! I do not enjoy sweating. Thank the good people at Napoleon that our grill has a side burner, it allows me to make this amazing pasta salad outside and not turn my kitchen into a sauna. 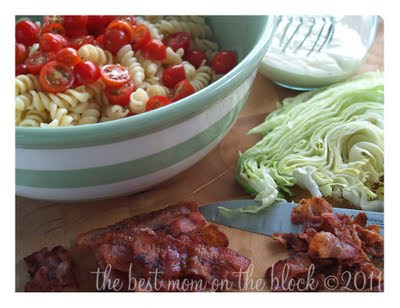 I can't wait to take this salad to a picnic or barbeque at someone else's house, I mean, who doesn't love bacon? It'll be the most popular salad on the buffet table! This salad is also great for quick lunches and if you add some grilled chicken  you've got an easy, and totally yummy dinner salad. 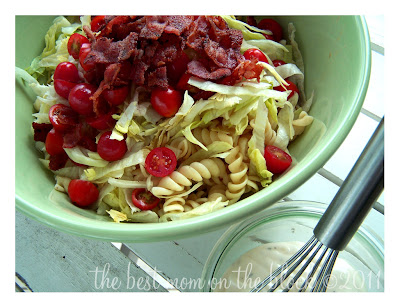 I don't recommend adding the lettuce until you're ready to eat as it'll get soggy and you lose the great crunch factor of a nice head of iceburg lettuce. 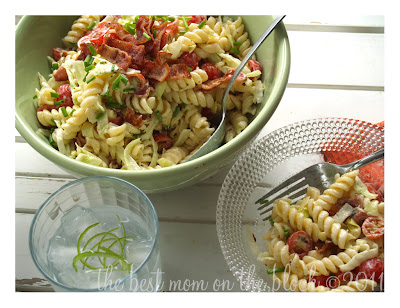 1. Cook your pasta to al denté in salted water and rinse lightly.
2. Cook your bacon until crispy and chop into 1/2" pieces.
3. Mix the mayonnaise, ranch dressing, salt and pepper together.
4. Combine the pasta, bacon, lettuce, tomatoes and dressing in a large bowl mixing to coat the salad evenly.
5. Garnish with chopped chives and keep chilled until ready to serve. 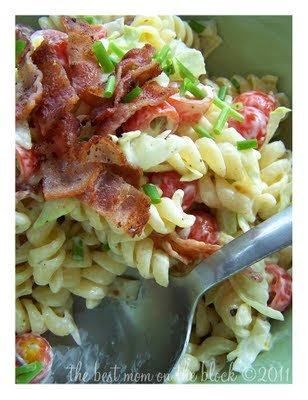 And now for a fantastic Summer Giveaway from my good friends at General Mills Canada!

Planning on hosting a Barbeque or picnic this summer? Or do you just like to grill for your family? Either way you're gonna love this Summer Prize Pack from General Mills!

Here are the rules:

All you have to do is head over to http://www.lifemadedelicious.ca/ and then come back here and tell me what your favourite LMD summer recipe is!

Contest is open to Canadian Residents only (We have a crazy postal strike and food items can't be shipped internationally).

Please include a way to reach you if you win (link to blog or website, email address, etc...).

A winner will be picked on July 7th. Good luck and happy Barbequing!

Amanda
please see my disclosure page for information on my Life Made Delicious Partnership.
Posted by Amanda at 3:10 PM 14 comments: 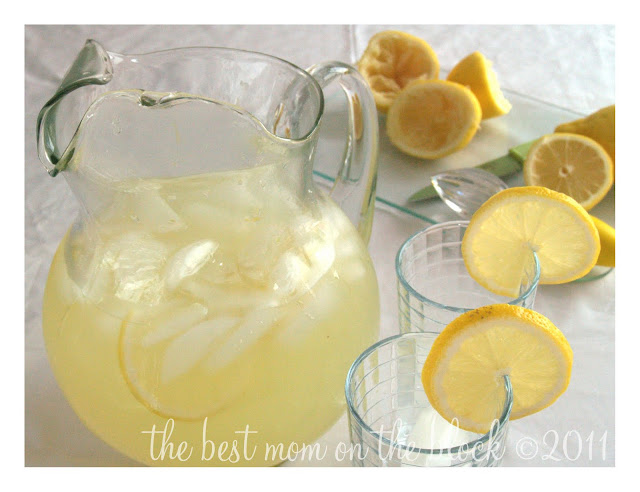 Summ-ah is herrrrrrre! I am beyond thrilled! I'm really hoping it means the end of germies and my kids being sick! If not, that's what patios and cocktails are for right? (mama's "medicine")

I was at the grocery store and a super huge pile of bright yellow lemons called to me. As luck would have it I was pretty thirsty so I grabbed a bag full and came home to make lemonade. There's nothing like homemade lemonade. It tastes fresh and tart and summery. It's very simple to make, especially if you have a fancy electric juice extractor, I don't so I got a bit of a workout but that's okay, just made me appreciate my fruity beverage even more!

Instructions:
1. Boil 1 cup of the water with the sugar until dissolved. Allow to cool.
2. Zest one or two of the lemons depending on how big they are to get 1 tbsp zest.
2. Juice the lemons through a sieve to catch the seeds.
3. In a large pitcher add the lemon juice, simple syrup (sugar water), zest and 5 cups of cold water.

Add ice and lemon slices to make it pretty. 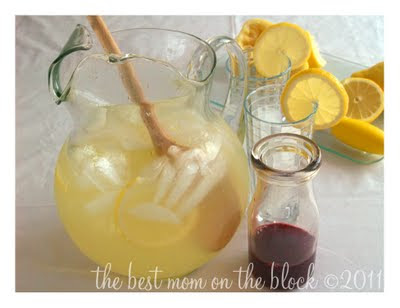 If you made the Raspberry Cheesecake in a Jar this is a great way to use the reserved liquid from macerating* the raspberries. Add the liquid to the lemonade and throw in a handful of fresh or frozen raspberries for a delicious pitcher of Raspberry Lemonade! 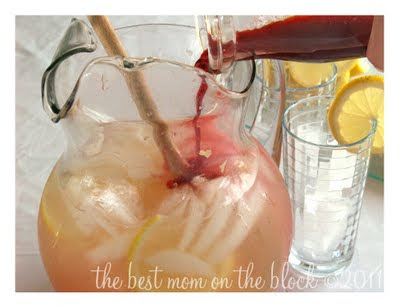 I swear I'm not a vampire! 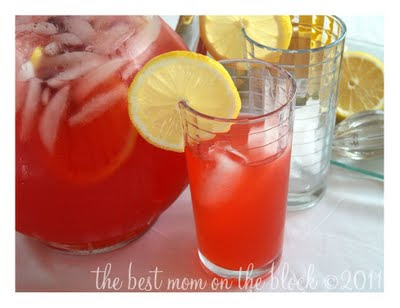 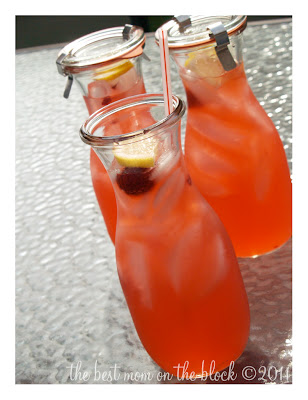 How cute is this for a picnic or Barbeque!
* Mascerating just means to mix with sugar and allow to sit so the sugar draws out the juices.

No Bake White Chocolate Raspberry Cheesecake in a Jar 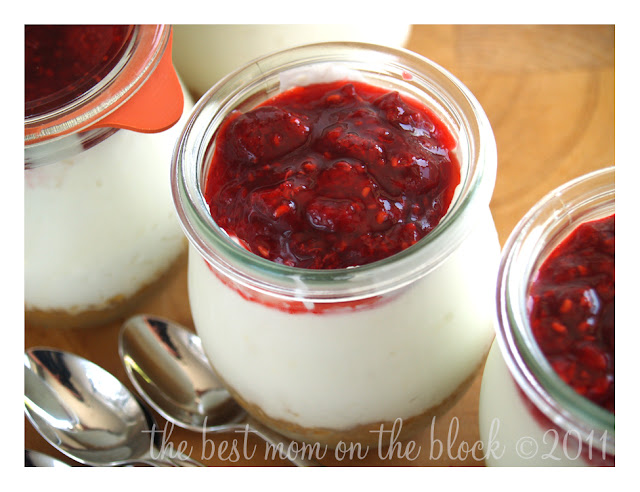 I have been so incredibly busy the past few weeks, blogging, cooking and baking had to take a back seat to family and volunteer obligations. When my schedule finally let up a bit we got struck with a heat wave that lasted 3 days and had temperatures near 40 degrees with the humidity.... cooking was not something that interested me. Sipping a cold bevvie on the patio yes, but slaving over a hot stove, no thanks.

Of course the weather rarely has an affect on my sweet tooth. After barbequing one night I was desperate for dessert (probably cause my 8 month old ate half my dinner!) and ice cream just wasn't going to cut it. I knew I needed a no bake dessert, so I hit pinterest (my new obsession!) looking for inspiration. I came across a picture that linked to My Baking Addiction's Cheesecake in a Jar recipe (I seem to be drawn to her photography). Jamie never fails to impress the hell out of me. 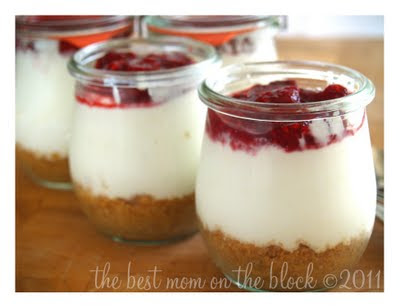 What I loved about this idea was that they're individual little cheesecakes, you can just throw one in your lunch, or grab one to enjoy while your kids play in the sprinkler. But Jamie's recipe was a bake cheesecake (I will be trying it for sure once fall comes!) and I was looking for a no bake option. I've done no bake cheesecake before with a lot of success so I thought I'd invent my own recipe and see what happened. 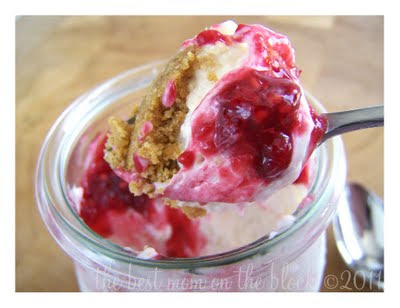 I combined cream cheese, fat free Greek yogurt and whipped cream to make a light and fluffy dessert that my friend Laurie described as "a cross between cheesecake and an amped up yogurt parfait". It's light, creamy, cheescakey and totally delish. You can make it in small mason jars, mugs, plastic cups or if you wanted to make one large one that would work too.

1. Put the raspberries in a bowl and sprinkle with the sugar for the topping and allow to macerate.
2. Combine the graham crumbs, sugar and butter and divide equally between 8 small jars (approx. 3 tbsp/jar). Pack down firmly.
3. In a stand mixer or deep bowl, beat the cream cheese and sugar until combined. Add the yogurt and mix until combined.
4. Melt the white chocolate in the microwave and allow to cool for a few minutes. Add to the cream cheese mixture and mix to combine.
5. In another bowl, whip the Dream Whip, vanilla and milk until stiff peaks form (approx. 8 minutes)
6. Gently fold the whipped topping into the cream cheese mixture.
7. Spoon the cheesecake equally into the jars.
8. Allow the cheesecakes to set in the refrigerator for at least 4 hours.
9. Drain the raspberries (reserve the liquid for a yummy pitcher of raspberry lemonade to go with the cheesecakes!) and add the raspberry preserves mixing to combine.
10. Top the cheesecakes with the raspberry topping and serve.


Tip: Keep the cheesecakes refrigerated or on ice until ready to eat. 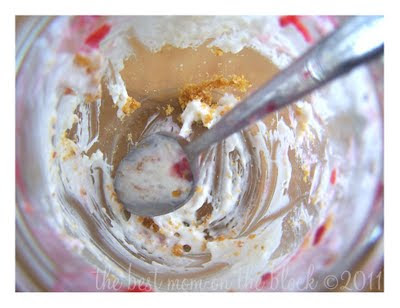