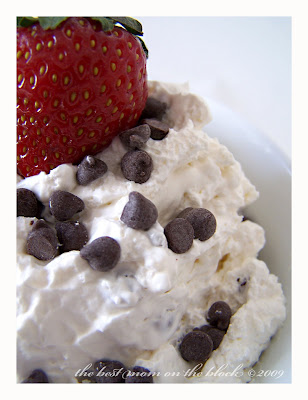 When I want cheesecake I want it noooooooow! Cheesecakes take time, I make them for special occasions or to take to parties, but on a Friday night when I'm curled up watching a chick-flick and I start craving something sweet, this is my snack of choice.

I went to a baby shower a couple of years ago and someone brought a similar dip to the party. When I tasted it I thought I'd died and gone to buffet heaven. I tracked down who brought this luscious (perfect word to describe it!) dip and asked for the recipe. She vaguely mentioned that there was cream cheese and cool whip in it and then turned her attention elsewhere. A little later I asked again and she changed the subject. Okay, so it was a secret recipe, whatev, but that wasn't going to stop me. A little research online and some experimentation and I re-created the dip, but added in some chocolate chips (cause I like to rock the chocolate wherever possible) and a touch of vanilla cause I put it in everything. I serve fresh fruit, teddy grahams (the kiddos love these), chocolate covered graham crackers, and chocolate squares for dipping into the dip, but anything works, even your finger!

If you're craving cheesecake and don't have the time to put into baking one, or you want a lighter (hello, light cream cheese and low-fat cool whip, this is practically diet food!) version, try this out! 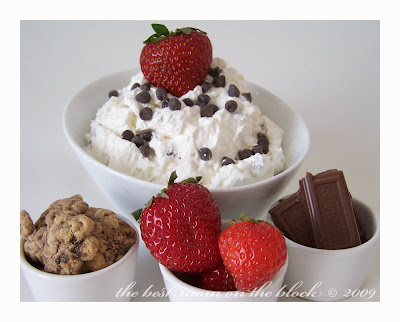 1. Beat softened cream cheese with the sugar and milk until smooth
2. Add the vanilla and mix.
3. Gently fold the mixture into the cool whip.
4. Stir in the chocolate chips and put in the fridge for 10-20 minutes to rest.
5. Serve with various fruits, crackers, and chocolates for dipping.

It tastes just like cheesecake, just a little fluffier! 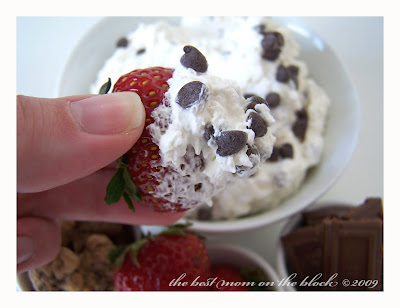