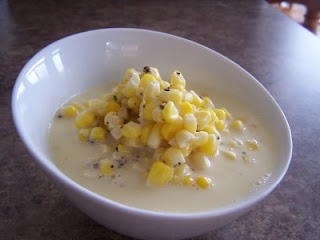 This is not that gloopy, fluorescent yellow, runny stuff from the can. This is REAL creamed corn, good ol' down home cookin'. I got this recipe from Chef Chuck Hughes, star of Food Network's Chuck's Day Off. I altered it slightly to make it a bit more calorie friendly.... but just a bit cause without all the creamy goodness it just isn't the same.

Instructions:
1. Husk corn and remove niblets from cob with a sharp knife.
2. Put into a saucepan and cover with cream and half & half.
3. Boil on medium heat until the kernels are soft and the liquid becomes thick and is reduced by half. About 10 minutes.
4. Remove from heat and add butter and salt & pepper to taste.

Serve alongside your favourite country-fare!
Posted by Amanda at 5:17 AM