Cinnamon Buns (Clone of a Cinnabon) 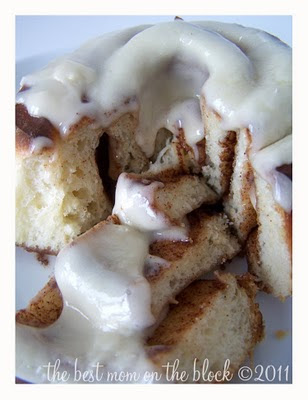 Well it just figures my first post of 2011 would be something like a Cinnamon Bun, especially since my New Year's Resolution was to lose my baby weight! But look at that thing, who could resist it? Cinnamon Buns are one of the only "dessert" type food (aka anything sweet) that my hubs will eat, so I like to indulge him now and then.

I never attempted to make Cinnamon Buns before hubs got me a bread maker for my birthday, not that I thought I couldn't do it, I'm just lazy that way (I've got 3 kids eh!). With a bread maker this recipe is crazy-easy. It does all the kneading and rising and all I have to do is watch!

I found this recipe on allrecipes.com and it claims to be a clone of the Cinnabon Chain Cinnamon Buns, and it totally is. I made a couple of modifications to make it easier and I found the original cream cheese frosting way too cream cheesy tasting. What I got is AH-MAZE-ING.

On a Sunday morning there's nothing better than a warm from the oven Cinnamon Bun to go with my skinny latte (I'm watching my weight yo), but this recipe is so easy you could have them any day of the week! 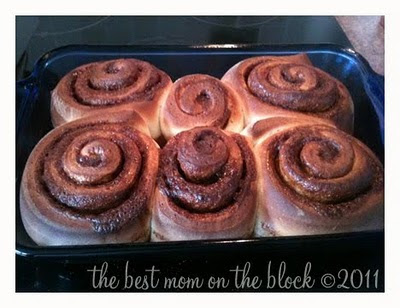 I made big ones for me and hubs and little ones for the kids
picture taken with my iPhone, excuse the quality!
Print this recipe

Cinnamon Buns (Clone of a Cinnabon) adapted from allrecipes.com

1. Place ingredients in the pan of the bread machine in the order recommended by the manufacturer. Select dough cycle; press Start.

2. After the dough has doubled in size (when the cycle is done) turn it out onto a lightly floured surface, cover with a tea towel and let rest for 10 minutes.

3. In a stand mixer, beat the softened butter, brown sugar and cinnamon until combined.

4. Roll dough into a 16" x 21" rectangle. Spread dough with the butter/sugar/cinnamon mixture leaving a 1" strip along the edge furthest from you bare.

6. Place rolls in a lightly greased 9x13 inch baking pan. Cover with a tea towel and let rise until nearly doubled, about 30 minutes.

8. Bake rolls in preheated oven until golden brown, about 15 minutes.

9. While rolls are baking, beat together the cream cheese, butter, confectioners' sugar, vanilla extract and salt. Spread frosting on warm rolls before serving. 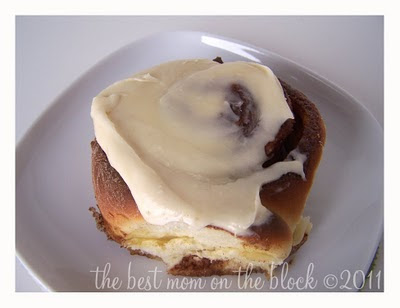